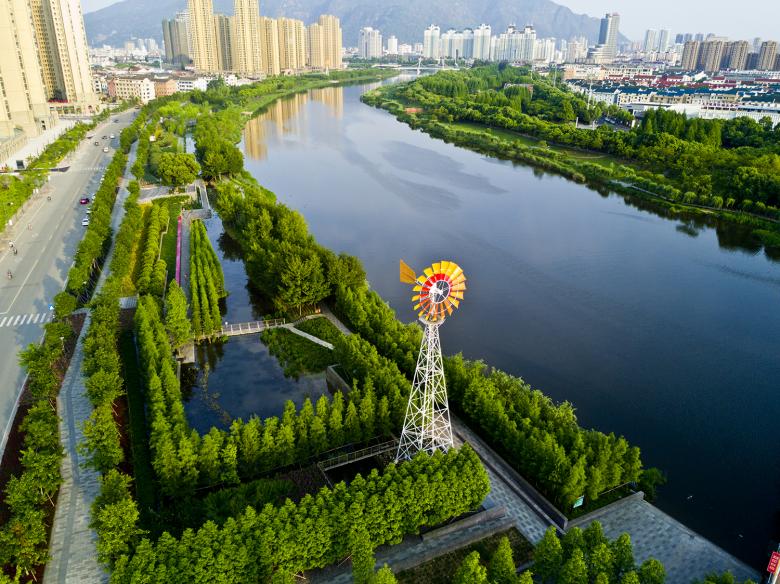 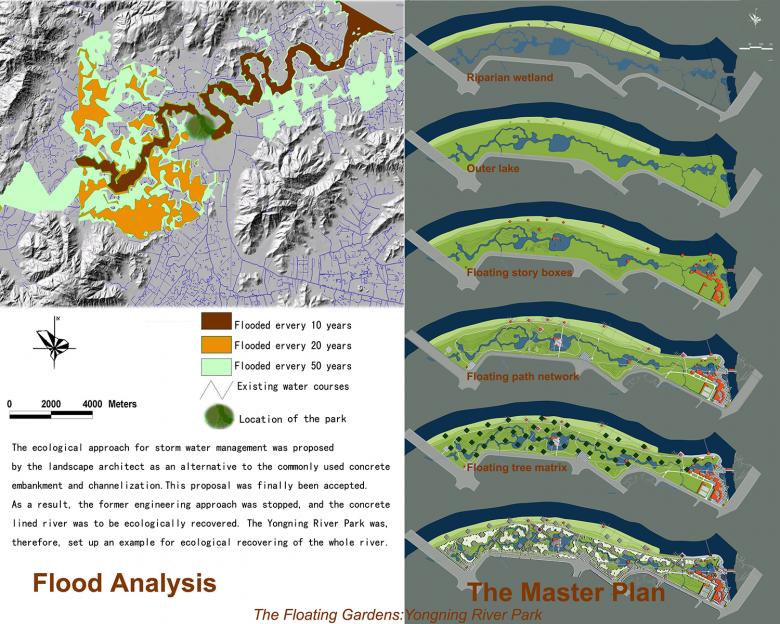 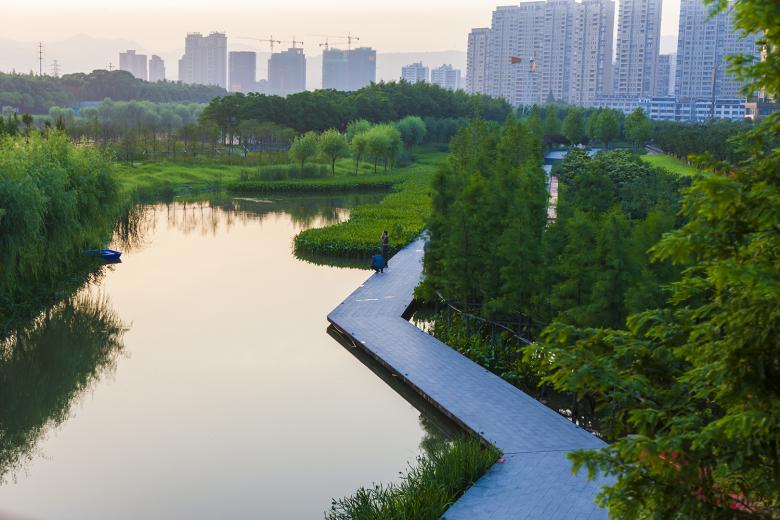 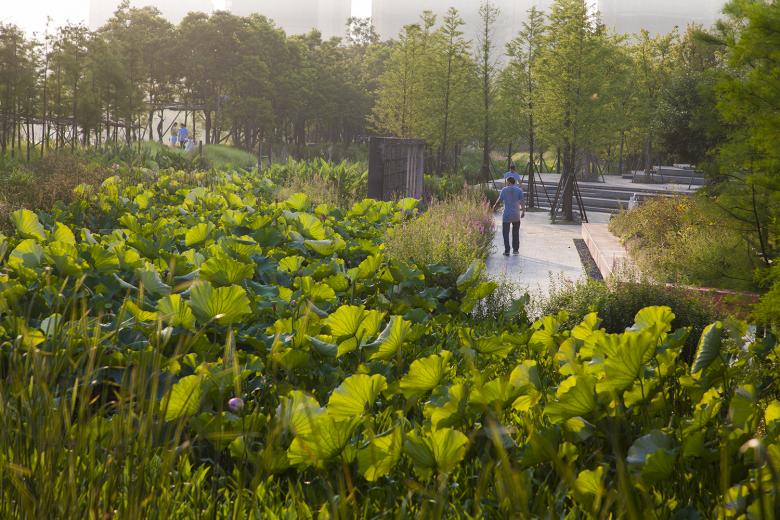 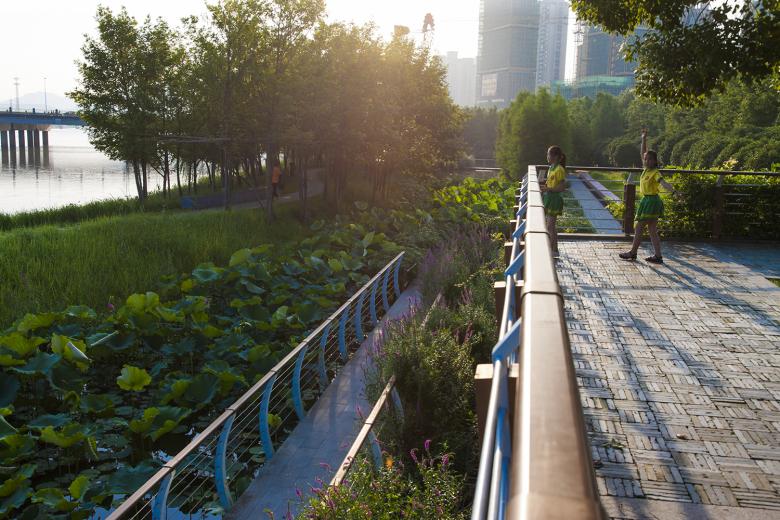 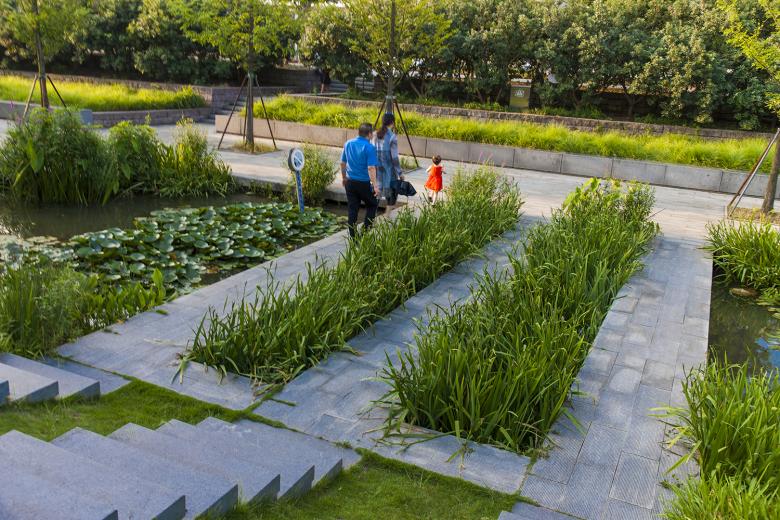 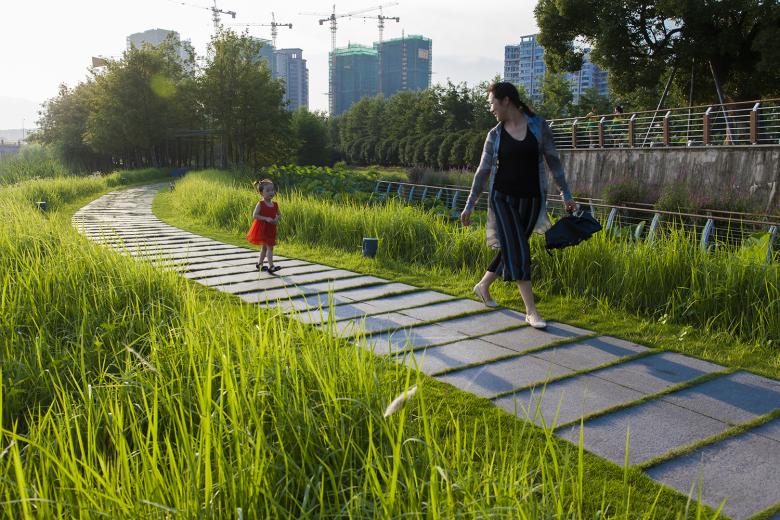 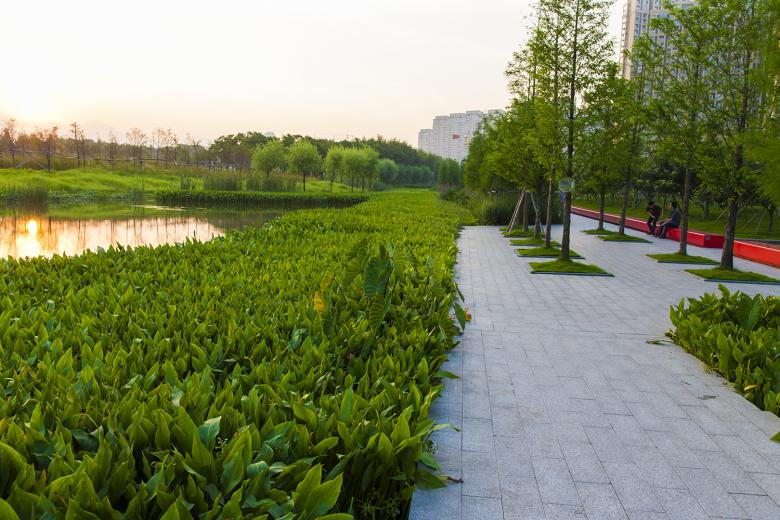 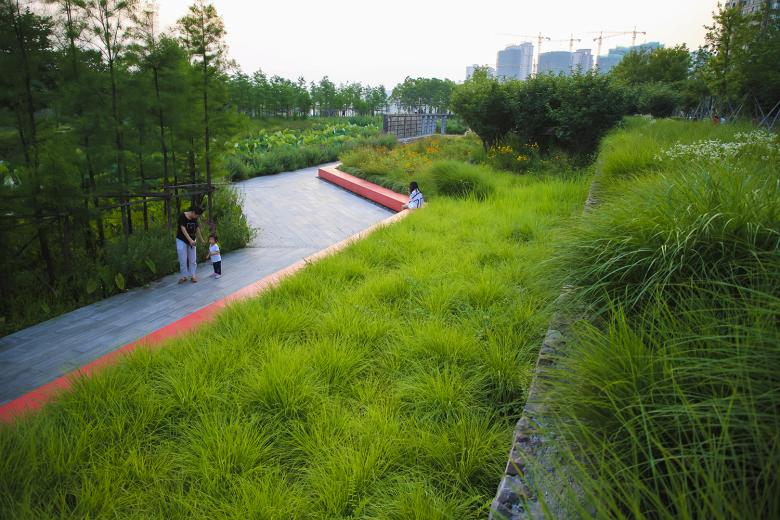 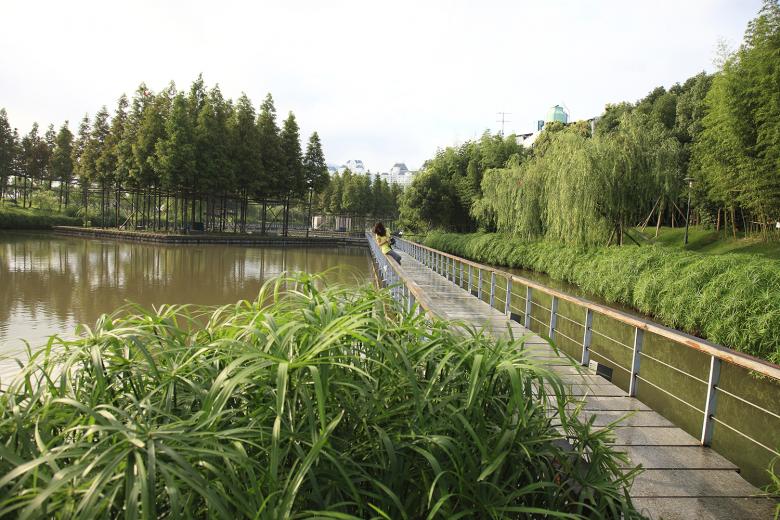 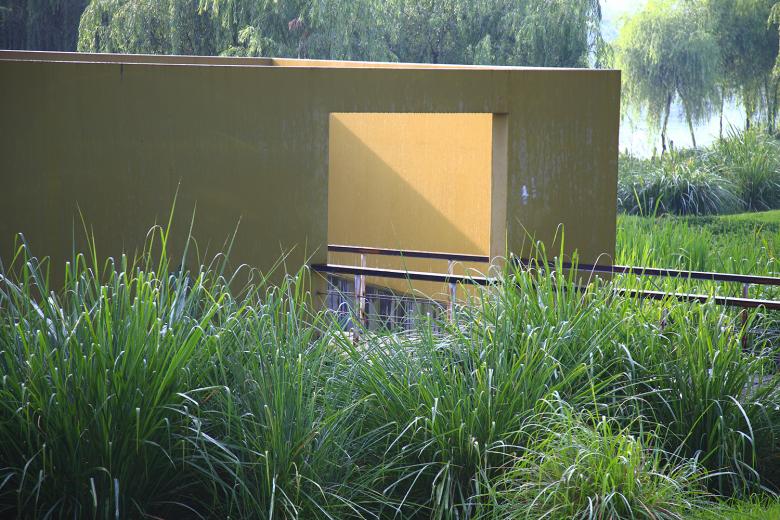 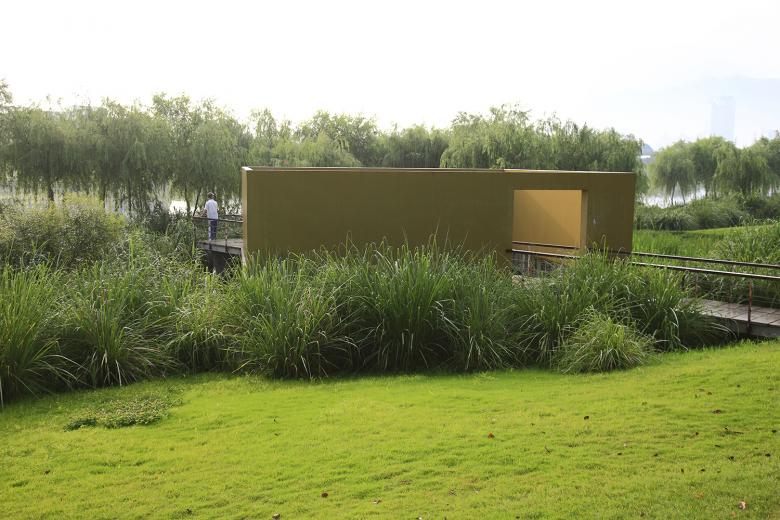 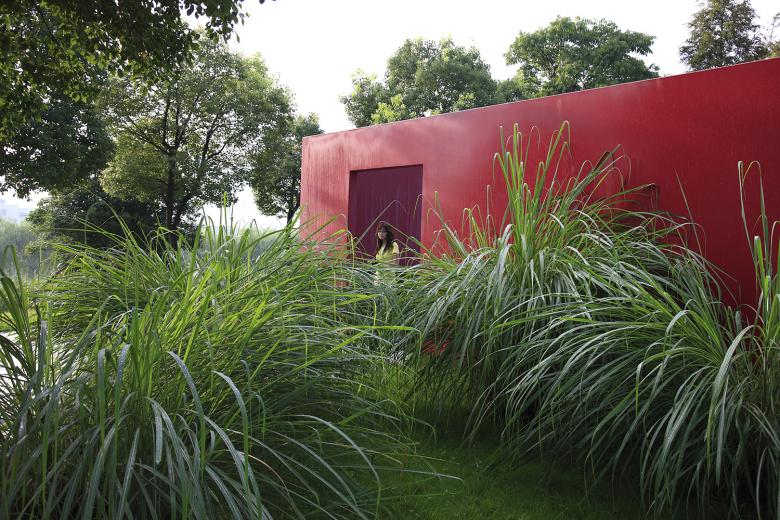 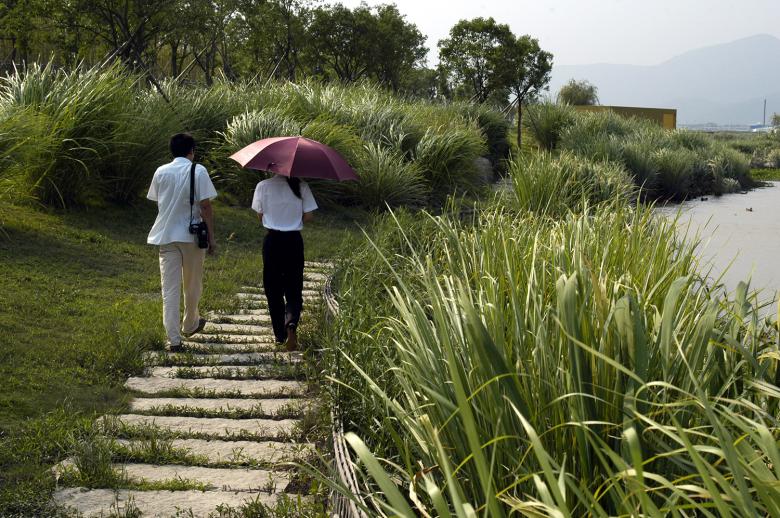 In July 2002, Taizhou City asked the landscape architect to design a 21-hectare park along the Yongning River, the mother river of the historical city at the east coast of China. At that time, most of the park site along the riverside was already embanked with concrete as part of the local flood control policy.

In meeting the needs of designing this park, the landscape architect had to provide a concept that would be accessible to both tourists and locals, while also providing an alternative flood control and storm water management solution to be used as a model for the entire river valley.

1. The result was the Floating Gardens

The challenges that faced the landscape architect were:
(1) To convince the local authority to stop channelizing the river with concrete. Not only is this process ecologically destructive to the fragile edge conditions of the inter-tidal zones, but it is also culturally and historically insensitive to the traditional symbolism and place of the river with respect to the lives of the local inhabitants. Additionally, canalization of the river is an expensive measure that uses up valuable public funds, which could be allocated to other public projects.

(2) To design an alternative flood control and storm water management solution, which would be used as a model for the entire river valley management. As a part of the speedy urbanization process in China, almost all rivers in China are finding the same fate; single-minded flood control projects based on concrete engineering and damming are canalizing their banks. Vis-à-vis this prevailing trend, this design would become a model not only for the Yongning River, but also a visible model for all the river treatment and flood control projects in China.

(3) To design a functioning park, which unlike a natural bird sanctuary which can flood and serve wildlife, must also be accessible and serve tourists and locals.

2.The design solutions: The Floating Gardens

The concept of Floating Gardens was developed to meet the above challenges.

The design draws on the following aspects:

(1) A regional and drainage approach: a storm water process analysis showed the flood security patterns at every 5, 20, and 50 years level. These analyses become the basis for the site design of the park.

(2) An alternative flood control solution: a wetland system, based on the regional flood security pattern analysis enabled flood control and water management to become an integral part of the park design. The whole site along the river becomes a multi-functional project under the leadership of the landscape architect.

(3) The matrix layer for the natural processes: composed of a restored riparian wetland along the flood plain and an outer wetland (lake) outside of the river bank that runs parallel to the river, the entirety of the park is covered with native communities. During the monsoon season, both the riparian wetland and the outside wetland are flooded. During the dry season, the outer wetland will still be submerged from both the retained water and fresh water from the inlet located in the upper reach of the river. Year round, water is accessible to park users.

(4) Native wetland plants, trees and bamboos are massed along the riverbank and throughout the design not only to ensure successful establishment of the vegetation, but also to promote continuity of the design with the surrounding ecosystem.

(5) The upper layer for the humanity which "floats" above the seasonally flooded natural matrix, is composed of groves of native trees, a network of paths extends from the urban fabric downwards the park, while a matrix of story box