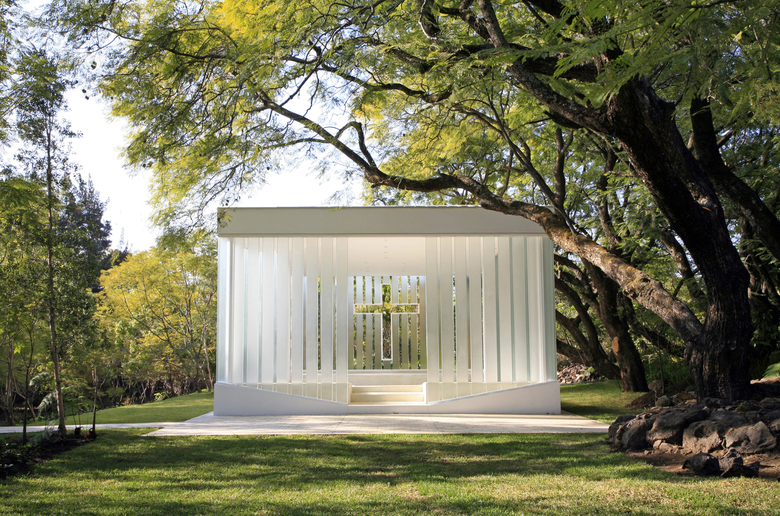 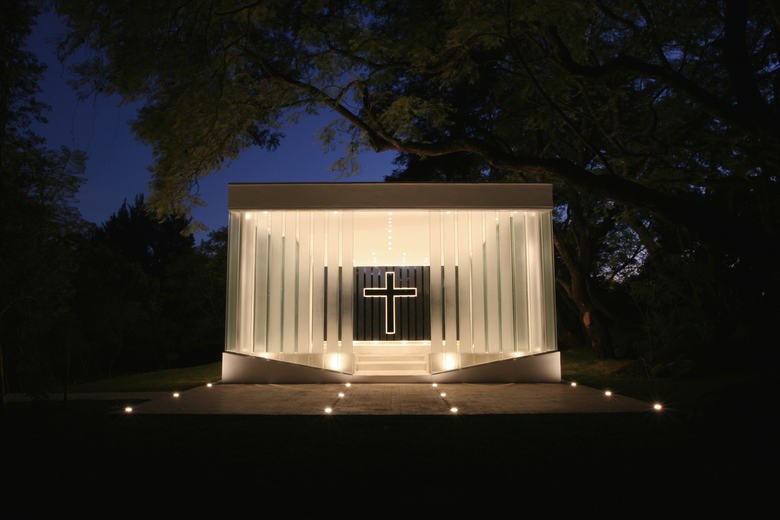 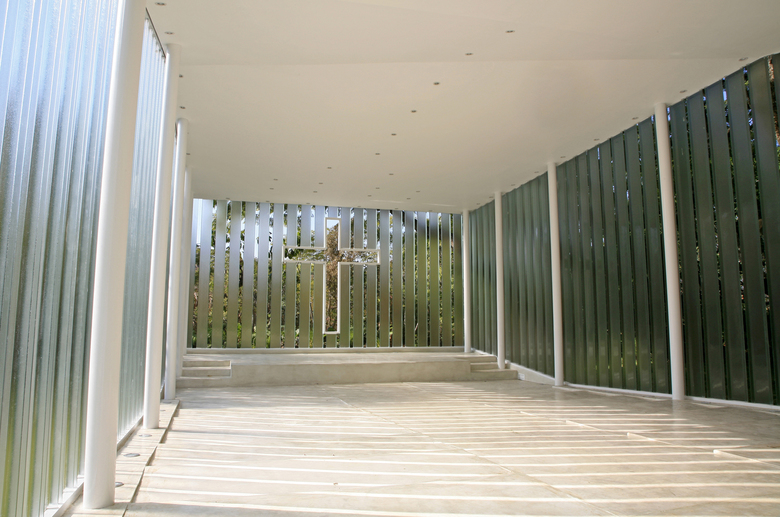 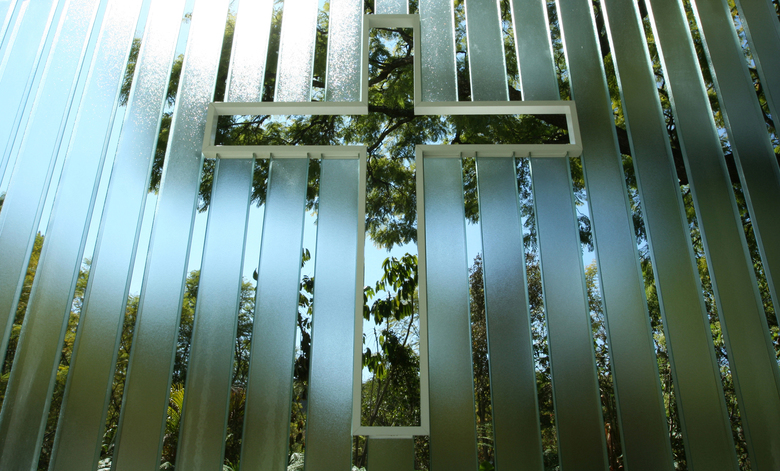 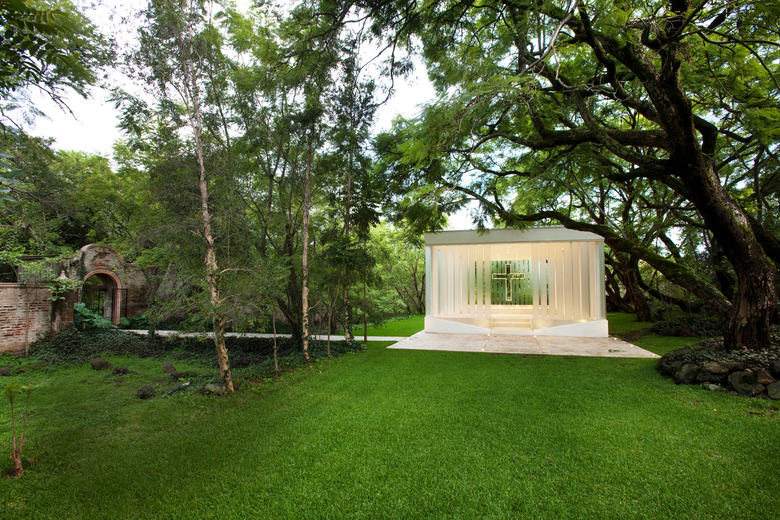 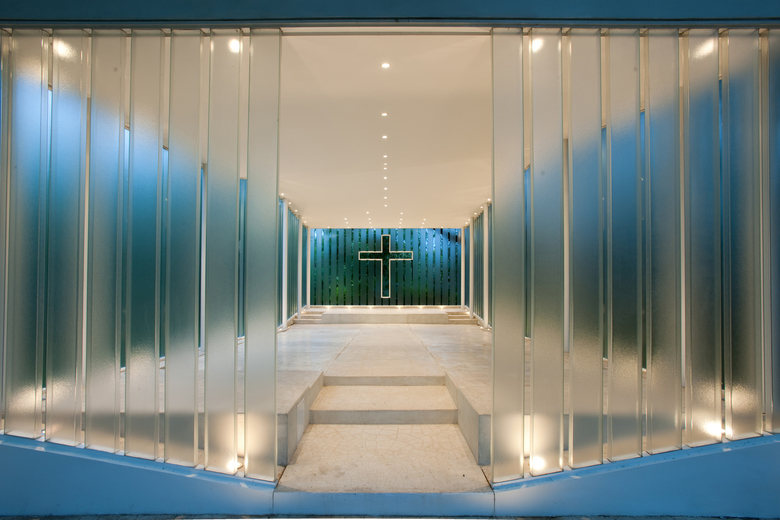 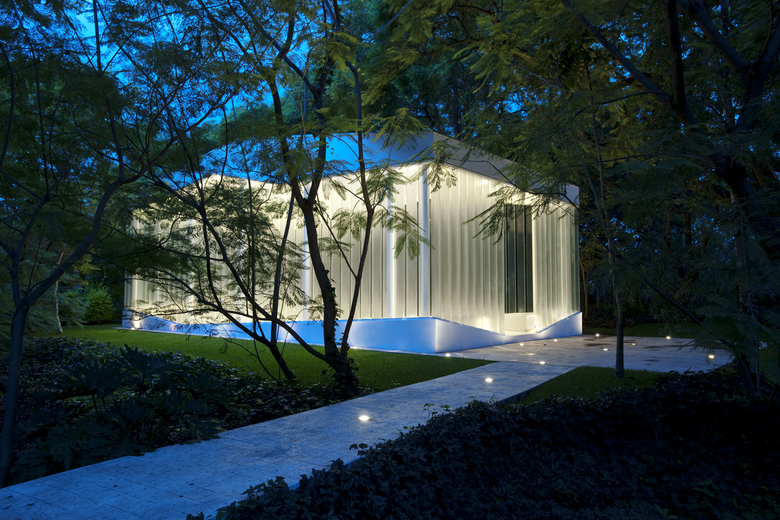 La Estancia Wedding Gardens were conceived in a traditional Mexican baroque colonial style. When one of Bunker’s associates decided to marry here it was made known to us that the owners had been toying for some time with the idea of building a chapel in the same style as their gardens, since all previous weddings took place under a light canvas canopy roof. They found very romantic the idea of an architect designing the chapel he would marry in so the commission was granted to us.

The client brief was pretty simple: a colonial-style closed-wall masonry chapel that blended with the surrounding architecture. This deeply troubled us… First of all we did not believe in styles and second, it would be a shame to close the chapel to the surrounding beautiful garden. So we decided to do the complete opposite: an open glass chapel that contrasted with its surroundings. When we finally won the clients over to our design we realized we had a big problem: the was in four months!

The site for the chapel was carefully chosen within an enormous area of abundant vegetation. We selected a location that would not require the removal of any of the existing plants or trees, under large jacarandas which form a natural arch over the chapel and provide it with ample shade. We strived to bring about the least possible impact on the site.

We believe Tadao Ando’s Chapel of Light is a cornerstone in the conception of modern chapels. Around the time of the commission, Steven Holl’s Nelson-Atkins Museum of Art had been recently inaugurated and we were deeply impressed by it. We wanted a Tadao Ando meets Steven Holl chapel.

A glass chapel in a warm tropical climate seems like a contradiction in terms. How could we avoid it from becoming a GREENHOUSE? (We disapproved of the use of air conditioning given the size of the project and the environmental issues it engenders)

The chapel was conceived as a box and compressed to form a peaked roof. Different shapes were traced on its lateral facades to form a prism which was then subtracted from the main volume. We then wrapped the four façades with U-profiled glass. In the altar façade, a cross was subtracted from the glass veil creating a window that looks out onto the surrounding garden. When the chapel was ready to start construction it was three months to the wedding. Time was pressing on… The morning of the wedding day the bride felt the chapel was “too empty” so she called in lastminute florists to fill the “empty space” with flowers. Our pure, abstract and minimalist space finally had its “baroque touch”.

Lesson learned:
In the end women always get what they want.