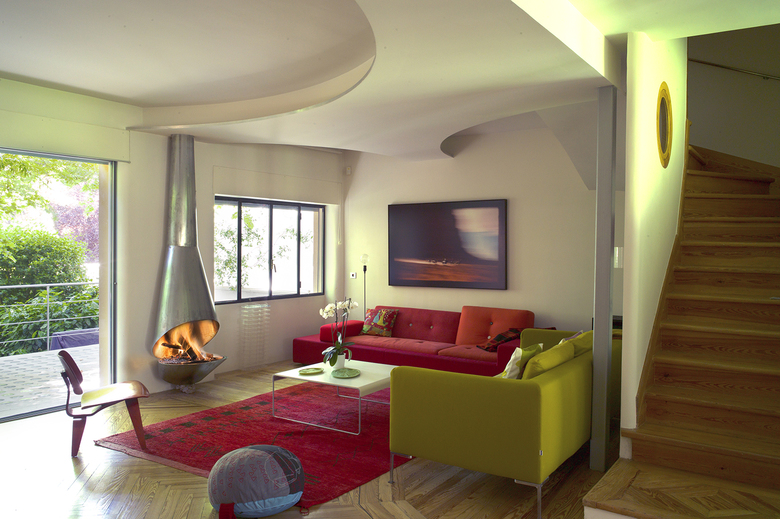 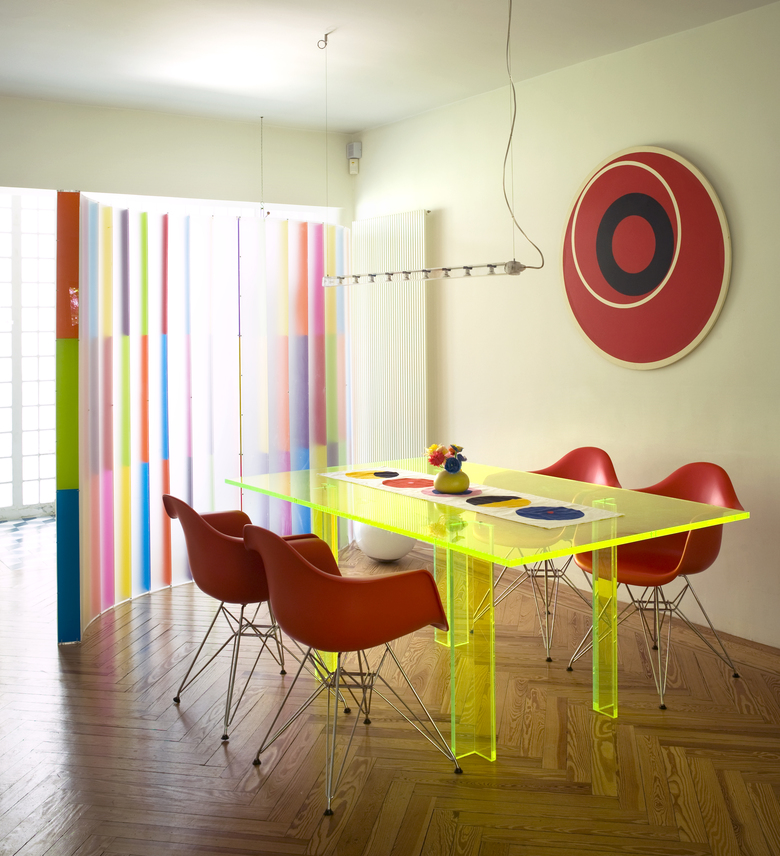 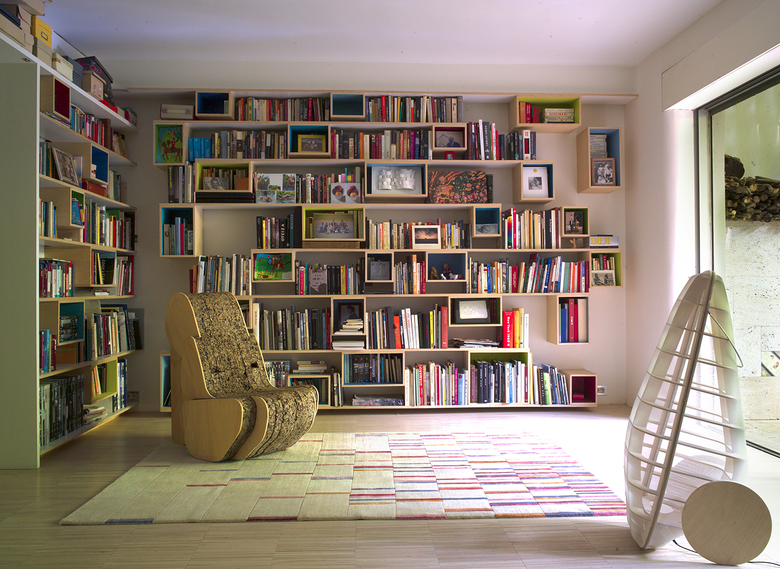 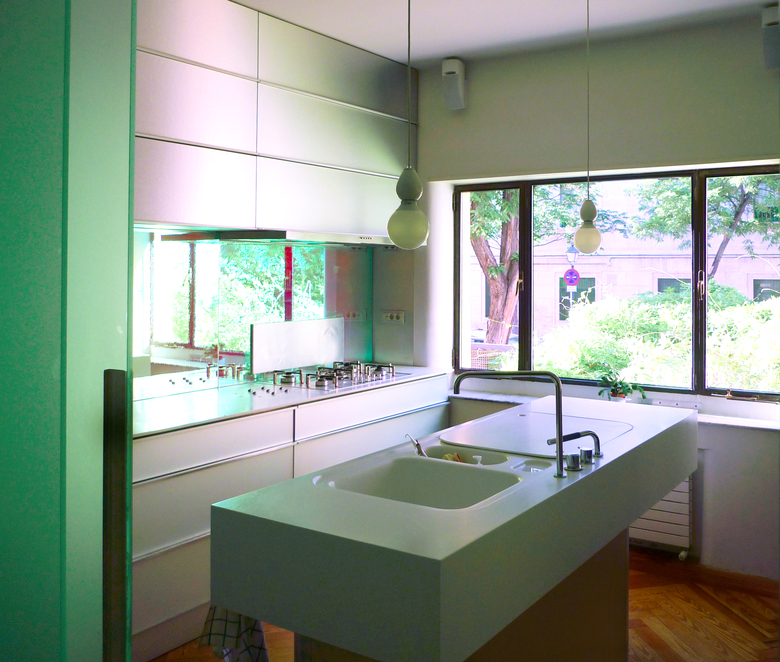 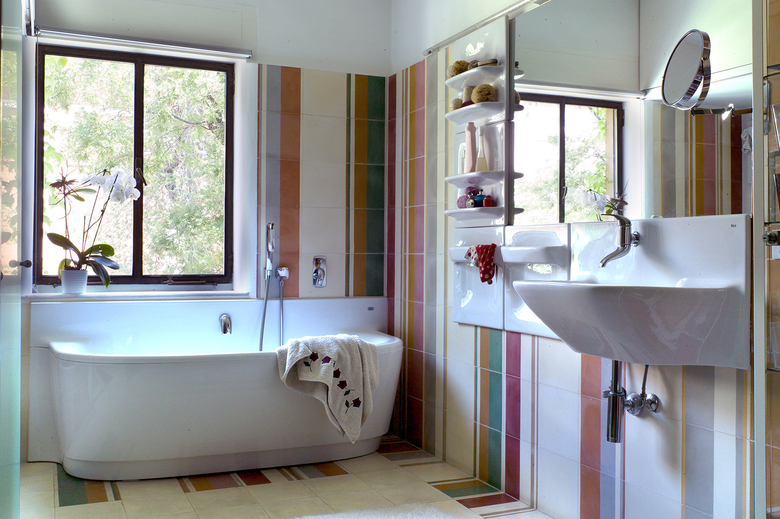 This row house in Madrid (Spain) was designed by Fernando García Mercadal in the 30’s and renovated by Luis Martínez-Feduchi in the 50’s, both renowned professionals. Its location in El Viso, one of the few rationalist garden neighborhoods in Madrid, makes this single-family home highly interesting for architects and urban planners.
The aim of this rehabilitation project was to preserve the original elements of the rationalist architecture while giving a contemporary style to the house through our furniture designs and novel interior design proposal. On the interior, the rounded jambs on the windows, the wooden floor and the stairs were maintained; and on the exterior the simple volume, its voids and its fenestration. Very few streets in Madrid maintain, as does this one, the unified design of the fences, with their thick granite copings and tubular bars. The use of glass block in the entry façade, characteristic of this area even though it was added in the 40’s, was also maintained.
In order to make the house more energy efficient, the steel sash windows, identical to those used by the Bauhaus, were restored and adjusted to admit thermal glass where they were designed with simple panes. Other characteristic elements that were preserved are the rounded window jambs on the interior. This detail, subtly diffusing incoming daylight, softens the space.
The intervention, regarding both its architecture and interior design, adapts the house to the needs of a contemporary family. Changes in life habits suggested that we move the kitchen from the semi-basement to the ground floor, alongside the dining room and living room. In the semi-basement a bedroom and bathroom remain, while the garage was enlarged and additional bedrooms converted to a library. On the first floor the three bedrooms and two bathrooms remain, and on the second floor we proposed a playroom and a little studio, as they appear in the drawings for Mercadal’s own house, which was adjacent to this one. The main uses of the house are concentrated in two floors.
Our proposal for the ground floor was to open up the space as much as possible taking out the partitions that divided the dining room from the living room, leaving a riveted steel column exposed next to the stairs. The kitchen is enclosed by large translucent doors. The stair wall was given a rounded shape, inspired by the existing windows jambs, while the living room’s dropped ceiling is cut by big arcs, covering a ceiling beam and creating cove lights. This room opens up to the garden through a 3m-wide sliding glass door that provides luminosity to the interior space and access to a large terrace riddled with circular glass blocks. The use of glass blocks provides light to the basement courtyard beneath.
The stairs that gives access to the first and second floors, as well as the Art Deco rail and a porthole skylight, were preserved and restored.
Our product designs in acrylic glass introduce color and contemporaneity to the intervention, where the modernist and the design of today contrast and blend in an unexpected way. The “Plexijazz” screen separates the entry hall from the dining area, where the central element is the fluorescent “Pleximesa” table. The natural light penetrates the space, heightening the transparency and lively color of these objects, as well as that of other designs of ours that complement the group, such as the “Chromodular” shelf and the “Ribbin Rocker”. The “Articulare” chimney, now produced by DAE Chimeneas, was designed specifically for this location in the house, the center of the living room, and its compact and curved form responds to the aforementioned circular and rounded elements.
The bedrooms, on the second floor, have been colorfully decorated with Peruvian bedspreads and the acrylic glass “Cube-rick” tables in bright colors. Separated by a dressing room there is a principal bathroom associated with the bedroom, where in the sanitary fixtures and accessories are all from the Frontalis series designed by Rafael Moneo and Belén Moneo for Roca.
As this house was to be our own, we were able to use it as a laboratory to test de functionality of our designs. We use new materials, testing their characteristics in real conditions. In the kitchen, for example, we are testing the mirrored glass of the cabinet doors and the backlit reflecting glass of the backsplash. In the third floor’s diaphanous playroom with access to a roof terrace we have covered the ceiling and walls with OSB panels, leaving exposed the main steel beam. We have also designed a storage system with plastic containers used in fruit packing.
Finally, we have transformed the basement, which had been exclusively for service making the spacious library with excellent natural light thanks to the 3m-wide double sliding doors that open up to a large sunken courtyard connected by stairs to the garden. Other designs of ours, such as the “Woodular” shelf system, the “Shooz Long” chair and the lamp “jamonera”, turn this space into a comfortable place to work and read.