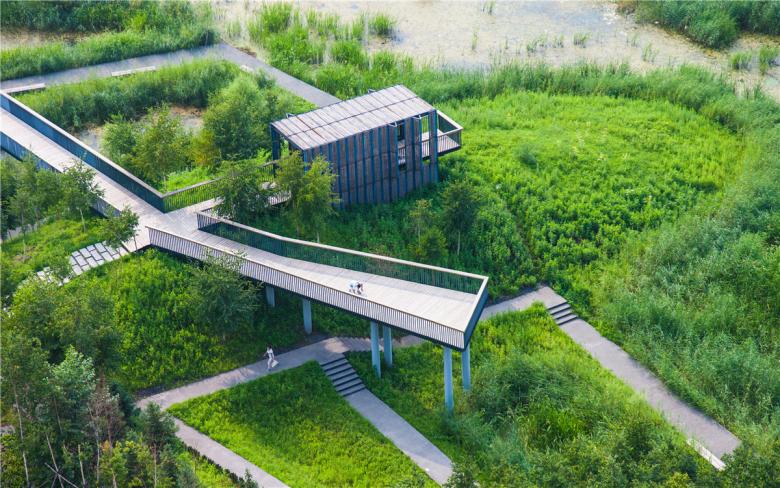 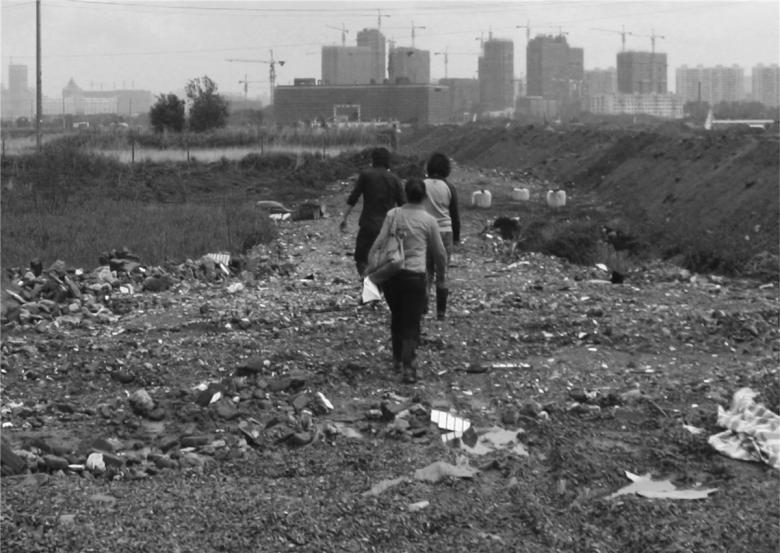 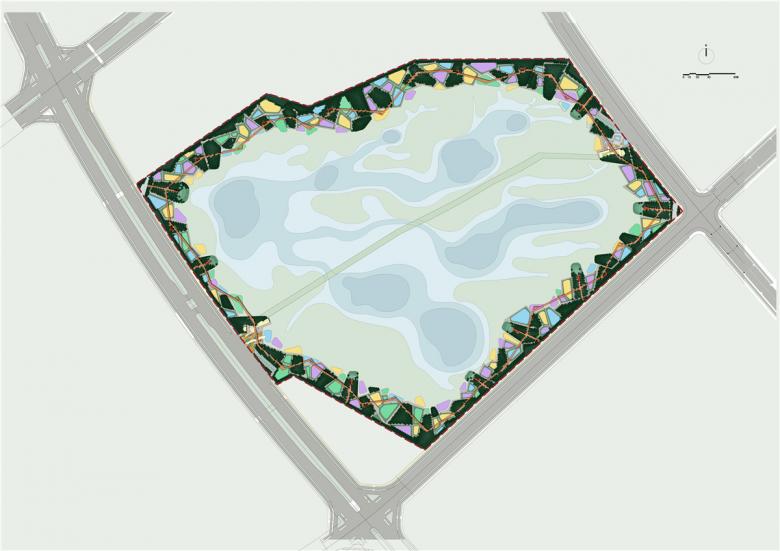 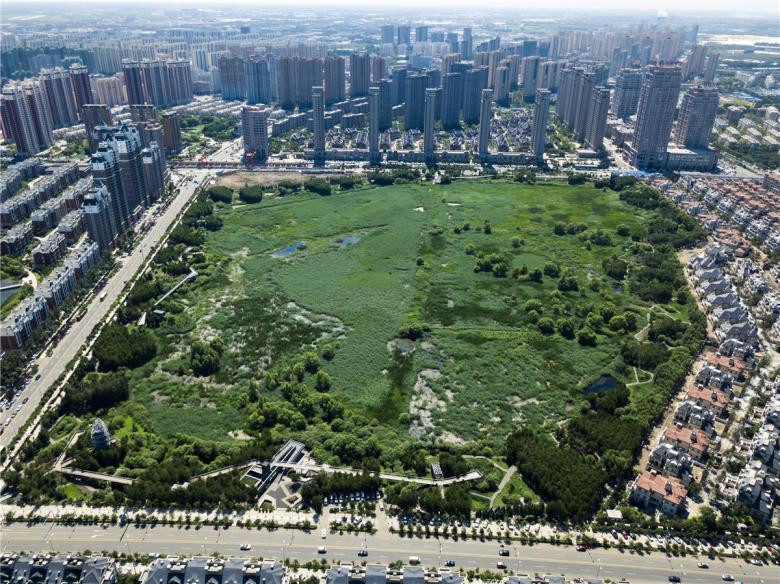 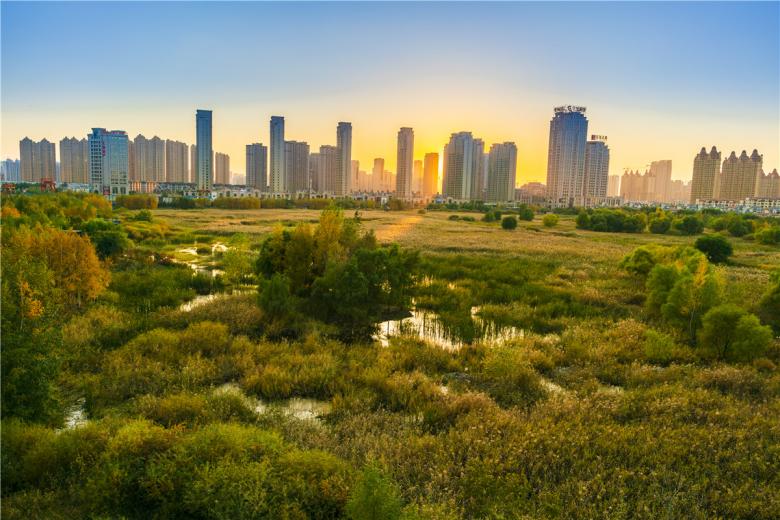 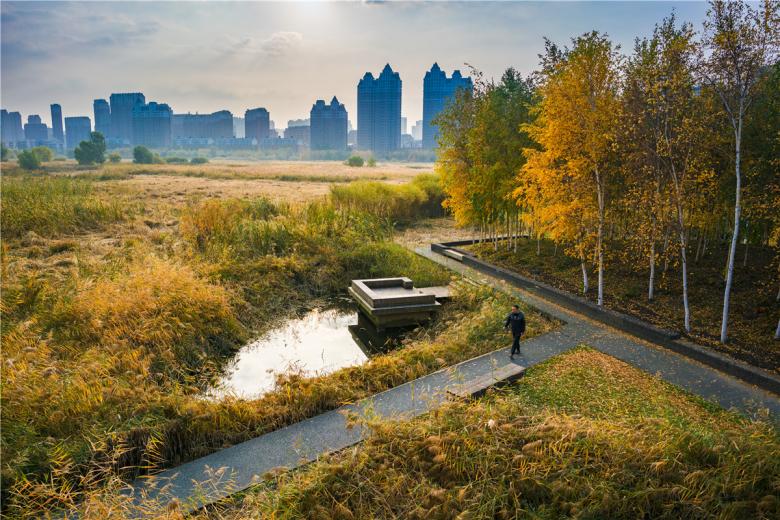 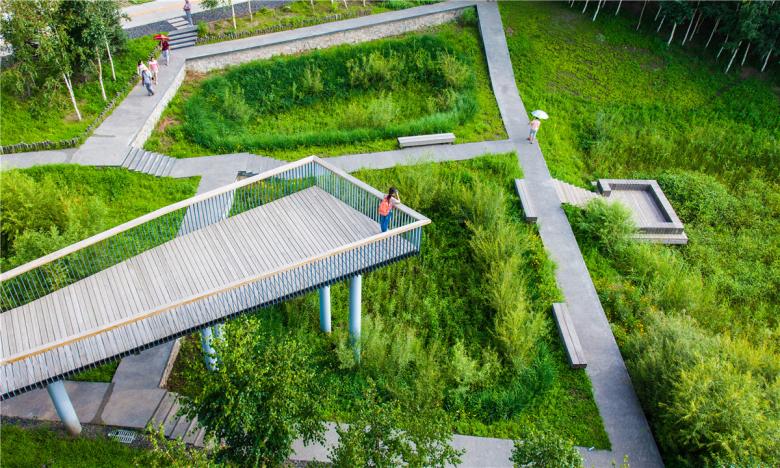 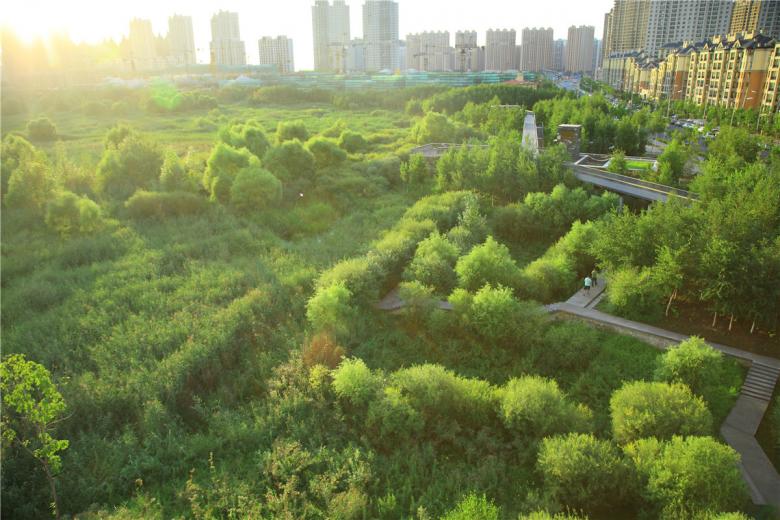 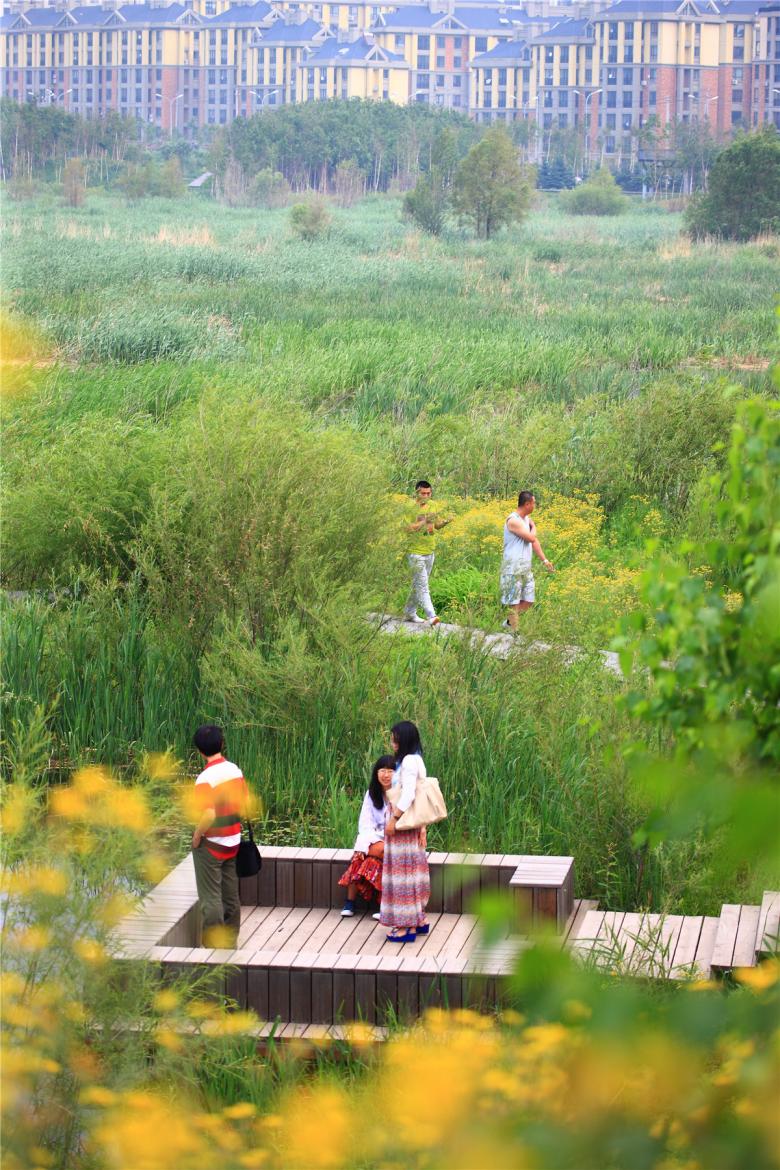 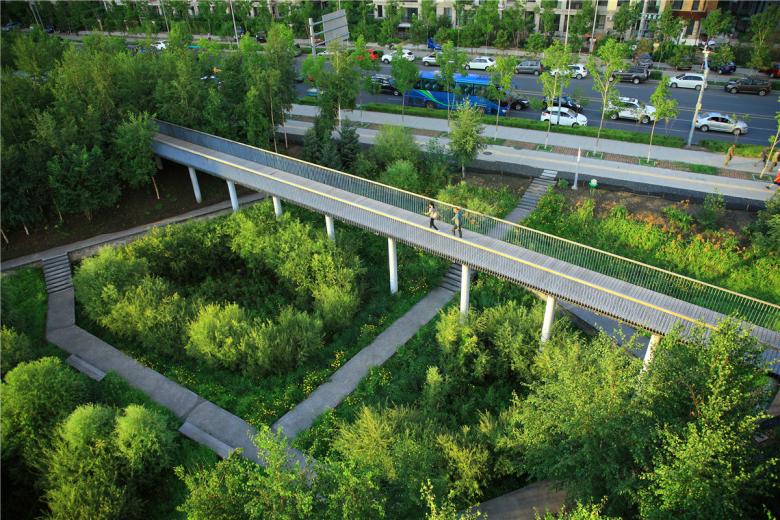 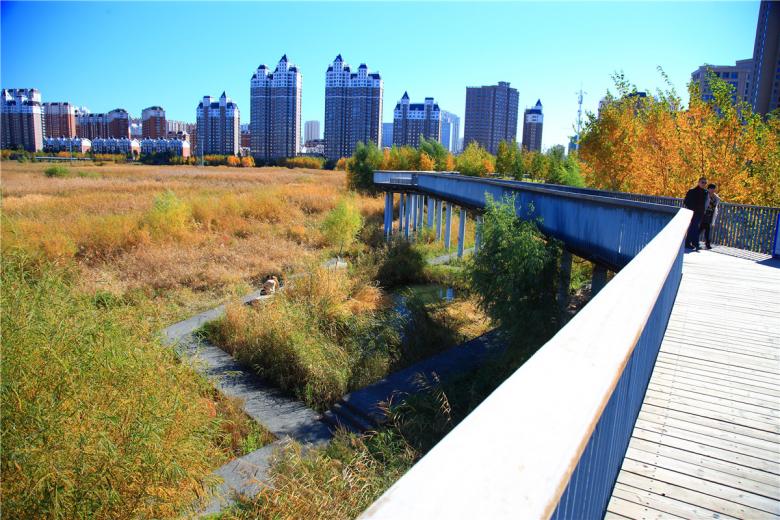 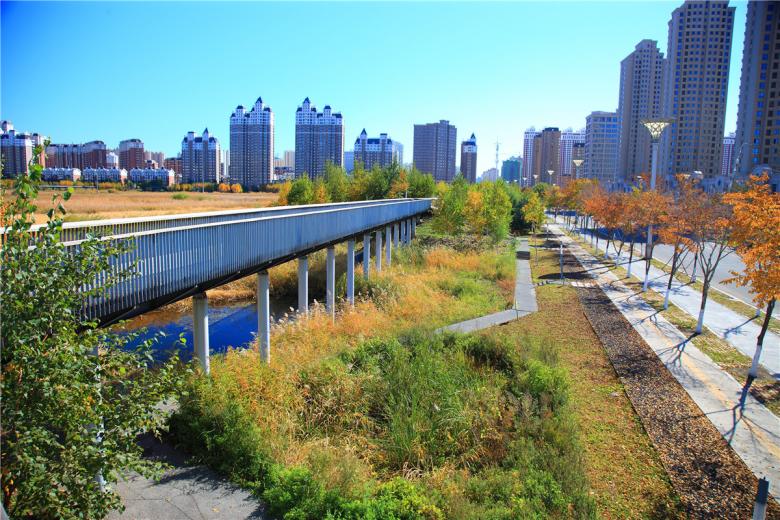 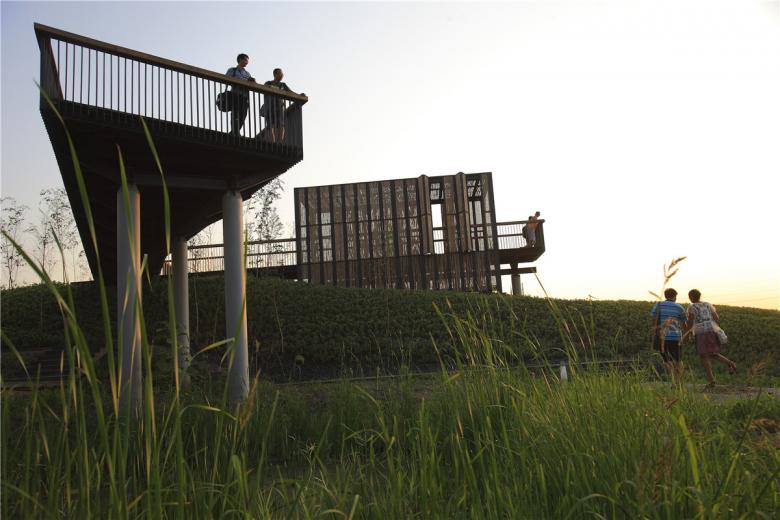 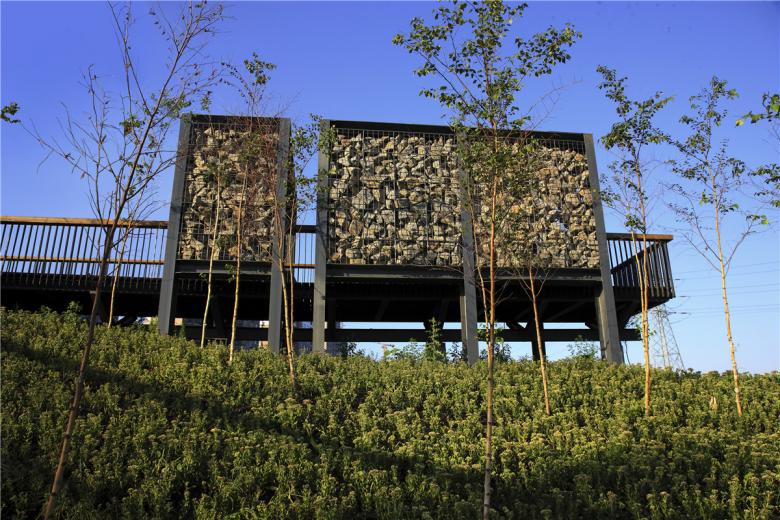 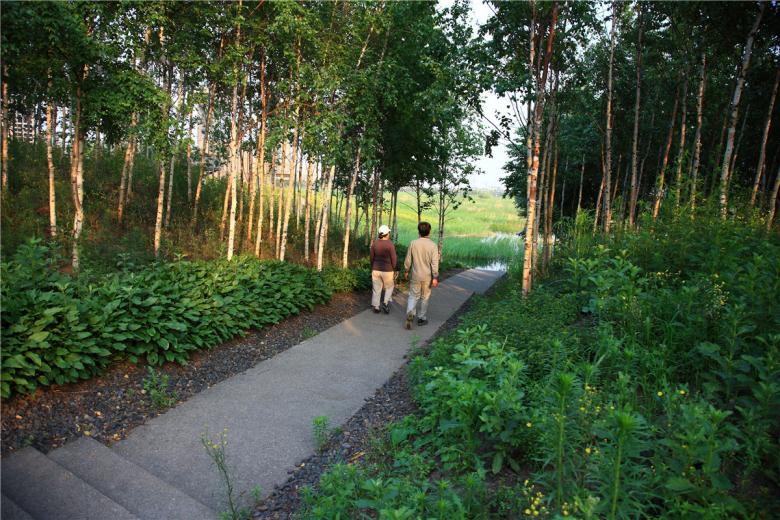 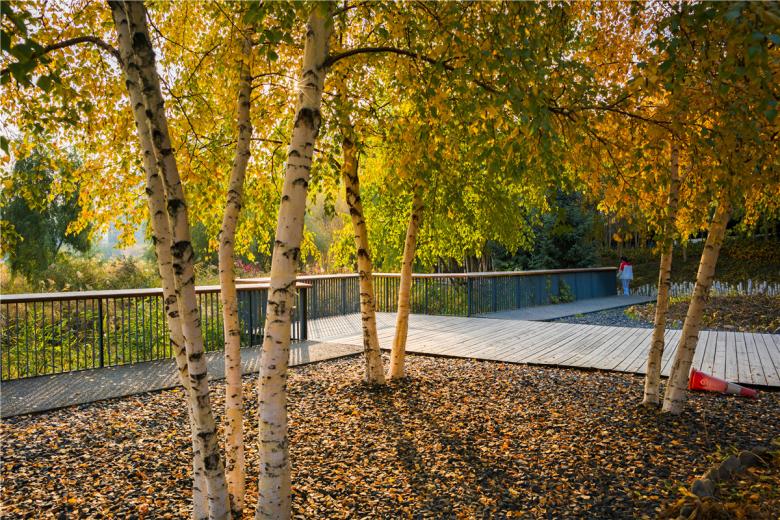 1 Project Statement
Contemporary cities are not resilient when faced with inundations of surface water. Landscape architecture can play a key role in addressing this problem. This project demonstrates a Sstormwater park that acts as a green sponge, cleansing and storing urban stormwater and can be integrated with other ecosystem services including the protection of native habitats, aquifer recharge, recreational use, and aesthetic experience, in all these ways fostering urban development.

2 Project Narratives
2.1 Challenges and Objectives
Beginning in 2006, a 2,733 hectare (6,753 acres) new urban district, Qunli New Town, was planned for the eastern outskirts of Haerbin in northern China. Thirty-two million square meters (344,445,133 sq. ft.) of building floor area will be constructed in the next 13 to 15 years. More than one third of a million people are expected to live there. While about 16 percent of the developable land was zoned as permeable green space, the majority of the former flat plain will be covered with impermeable concrete. The annual rainfall there is 567 millimeters (22 inches), with the months of June, July, and August accounting for 60 to 70 percent of annual precipitation. Floods and waterlogging have occurred frequently in the past, while at the same time the ground water table continues to drop due to its overuse.

In mid-2009, the landscape architect was commissioned to design a park of 34 hectares (84 acres) right in the middle of this new town, which is listed as a protected regional wetland. The site is surrounded on four sides by roads and dense development. This wetland had thereby been severed from its water sources and was under threat. The original task given by the client was to preserve this wetland. Going beyond the original task of preserving the wetland, the landscape architect proposed to transform the area into an urban stormwater park that will provide multiple ecosystems services, and will collect, cleanse, and store stormwater and infiltrate it into the aquifer, protect and recover the native habitats, proved a public space for recreational use and aesthetics experience, as well as foster urban development.

The challenges are obvious: How can a disappearing wetland be preserved in the middle of the city when its ecological and biological processes have been cut off by the urban context? How such an urban wetland ecosystem can be designed to provide multiple ecosystems for the city? And what is the economic way to deal with such a big landscape?

(1) The central part of the existing wetland is left along to allow the natural habitats to continue to evolve.

(2) Cut-and-fill strategy to create an outer ring of mounds and ponds. The cut-and-fill around the perimeter is a minimum earthwork strategy to transform the site. Earth is excavated and used to build up a necklace of ponds and mounds around the perimeter of the park. This ring acts as a stormwater filtrating and cleansing buffer zone for the core wetland, and a transition between nature and city. Stormwater from the newly built urban area is collected around the perimeter of the wetland and then released evenly into the wetland after having being filtered through the ponds. Native wetland grasses and meadows are grown on ponds of various depths, and natural processes are initiated. Groves of native silver Birch trees (Betula pendula) grow on mounds of various heights and create a dense woodland. A network of paths links the ring of ponds and mounds, allowing visitors to have a walking-through-forest experience. Platforms and seats are put near the ponds to enable people to have close contact with nature.

(3) The network of paths and platforms: A network of paths links the ring of ponds and mounds, allowing visitors to have a walking-through-forest experience. Platforms and seats are put near the ponds to enable people to have close contact with nature.

(4) A skywalk links the scattered mounds allowing residents to have an above-the-wetland and in-the-canopy experience. Platforms, five pavilions (Bamboo, Wood, Brick, Stone, and Metal), and two viewing towers (one made of steel and located at the east corner, the other one made of wood and looking like a tree at the north-west corner) are set on the mounds and connected by the skywalk, allowing visitors to have views into the distance and observation of nature in the center of the park.

The completely transformed site performs many functions, including collecting, cleansing, and storing stormwater, and recharging underground aquifers. The pre-existing wetland habitat has been restored and native biodiversity preserved. Potentially flooding stormwater now contributes to an environmental amenity in the city. The storm water park has not only become a popular urban amenity but has also been upgraded to a National Urban Wetland Park because of its improvement to ecological and biological conditions.

It is now a park performing many functions; collecting stormwater, cleansing, storing and recharging underground aquifers. It is observed that the park can retain and filtrate up to 500,000 cubic meters of stormwater, and has successfully solved the stormwater inundation problem for an area of 3 square kilometers (10 times the area of the park) in the past 2 years in 2012 and 2013. At the same time, the water quality has seen dramatically improved from the raw storm-water to the water in the central wetland after its being filtrated through the bio-swales system at the periphery.

This stormwater management project has been successful in developing a model and a series of techniques that are replicable and transferable all throughout China and can be replicated worldwide, especially in those countries with similar social and cultural conditions due to the following qualities:

(1) Low-tech and sustainable: This demonstrative protect showcase the low-tech approach to urban stormwater management and is easy to build/implement using local materials and easy to maintain for sustainable operation.

(2) Inexpensive: This ecological model of stormwater management is inexpensive to build and maintain, and therefore easy to replicate and hence suitable to be implemented in the developing countries, as well as in the developed countries.

(3) Efficient: This stormater management model is suitable in solving the urban stormwater inundation at various scale. This project demonstrates that if a city can allocate 10% of total area as green sponge area for storm-water management, it can virtually solve the storm-water problem that is commonly seen in the contemporary cities.

Other Projects by Turenscape