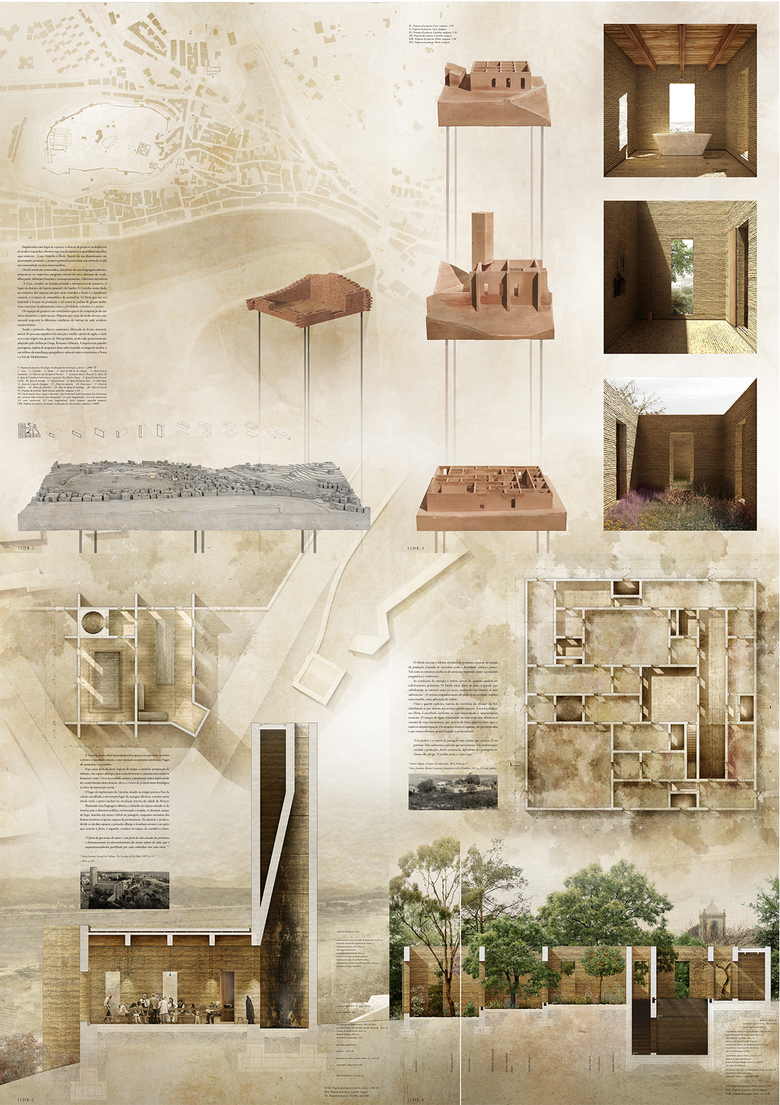 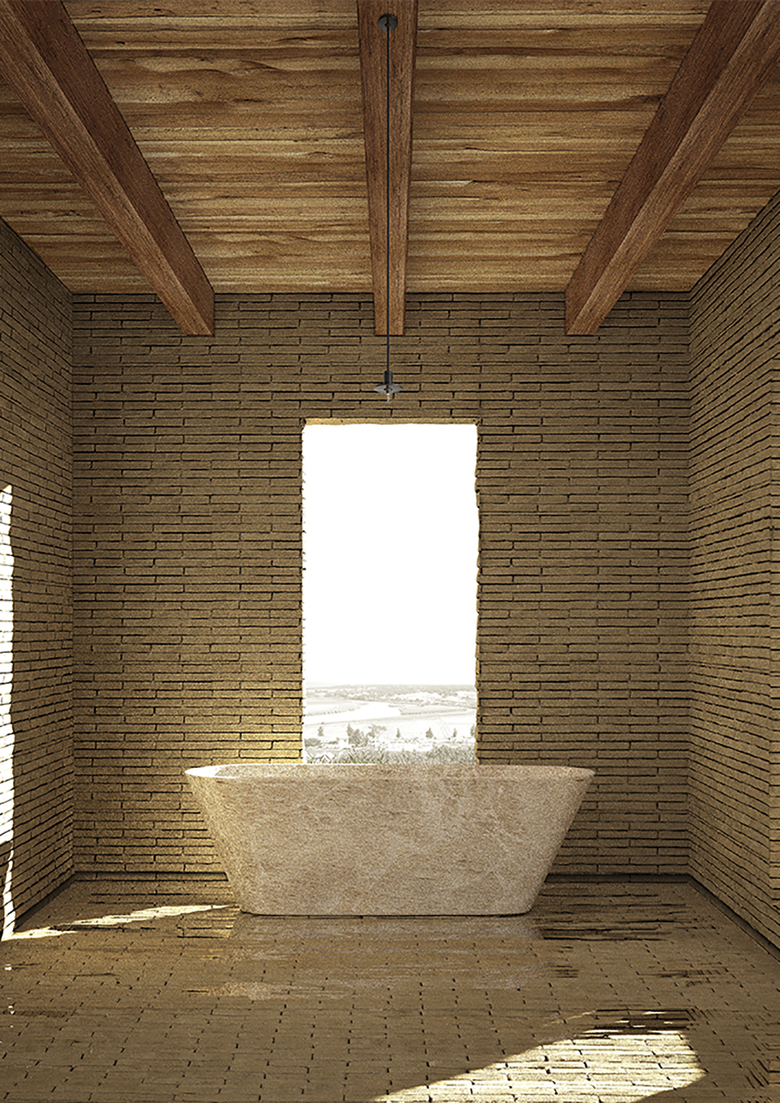 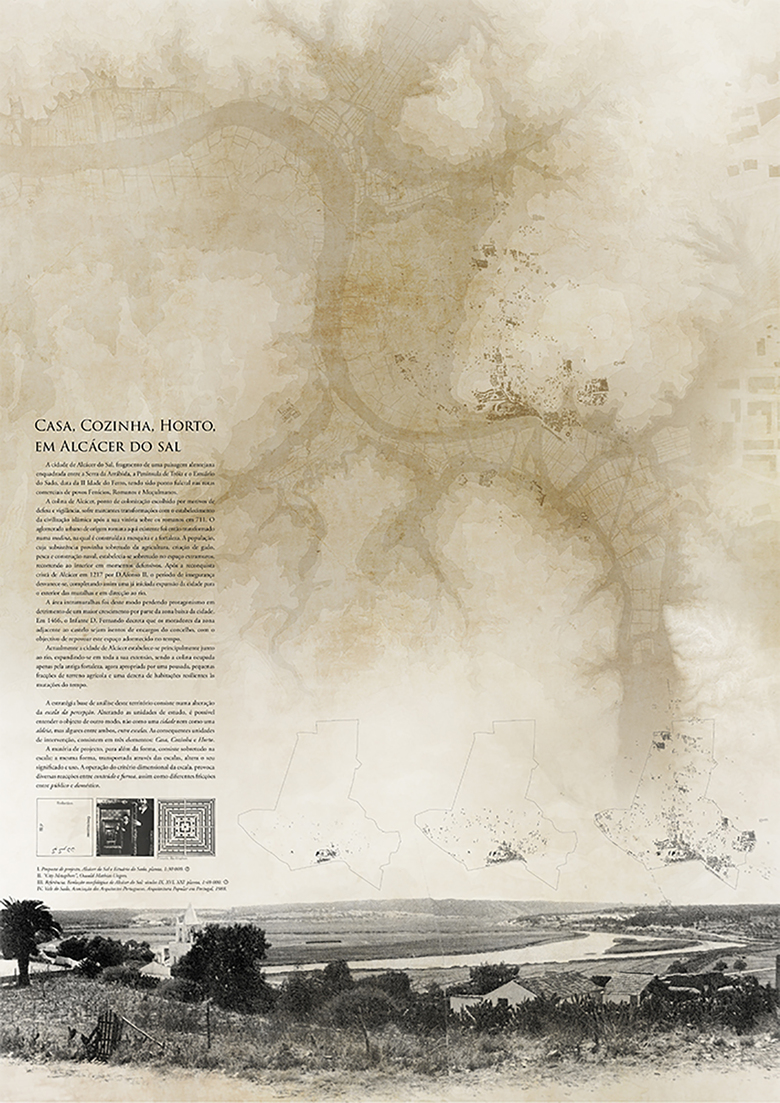 Alcácer do Sal and Firth of Sado 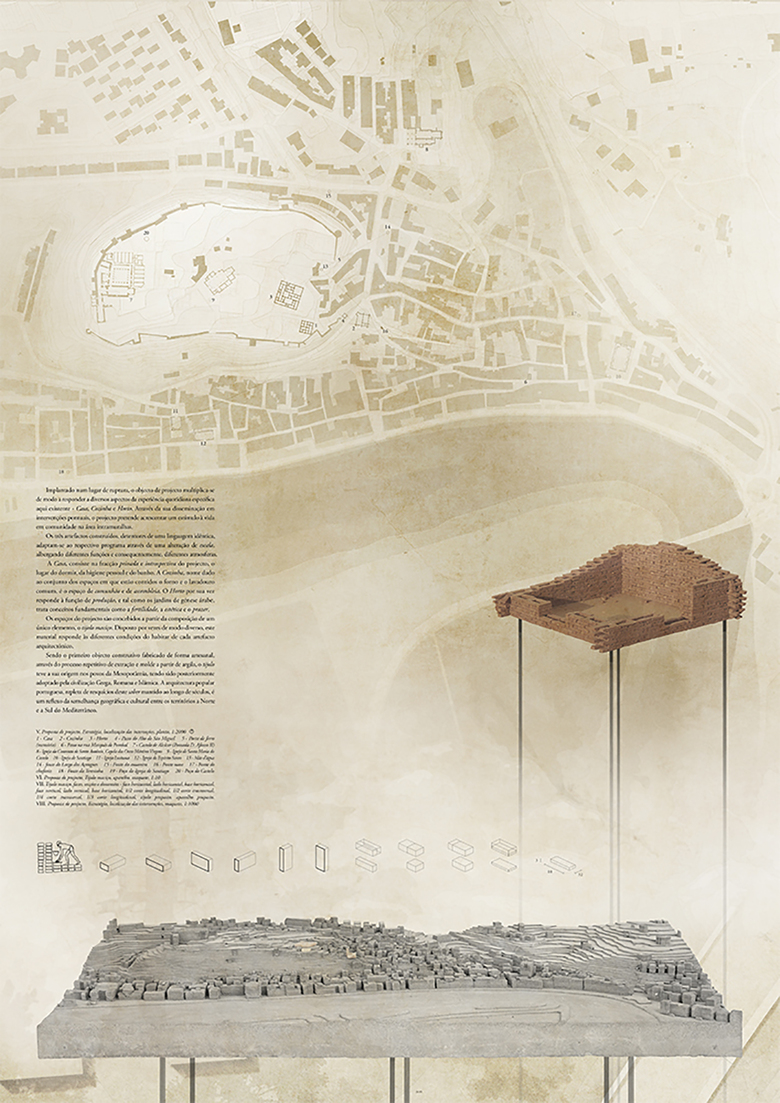 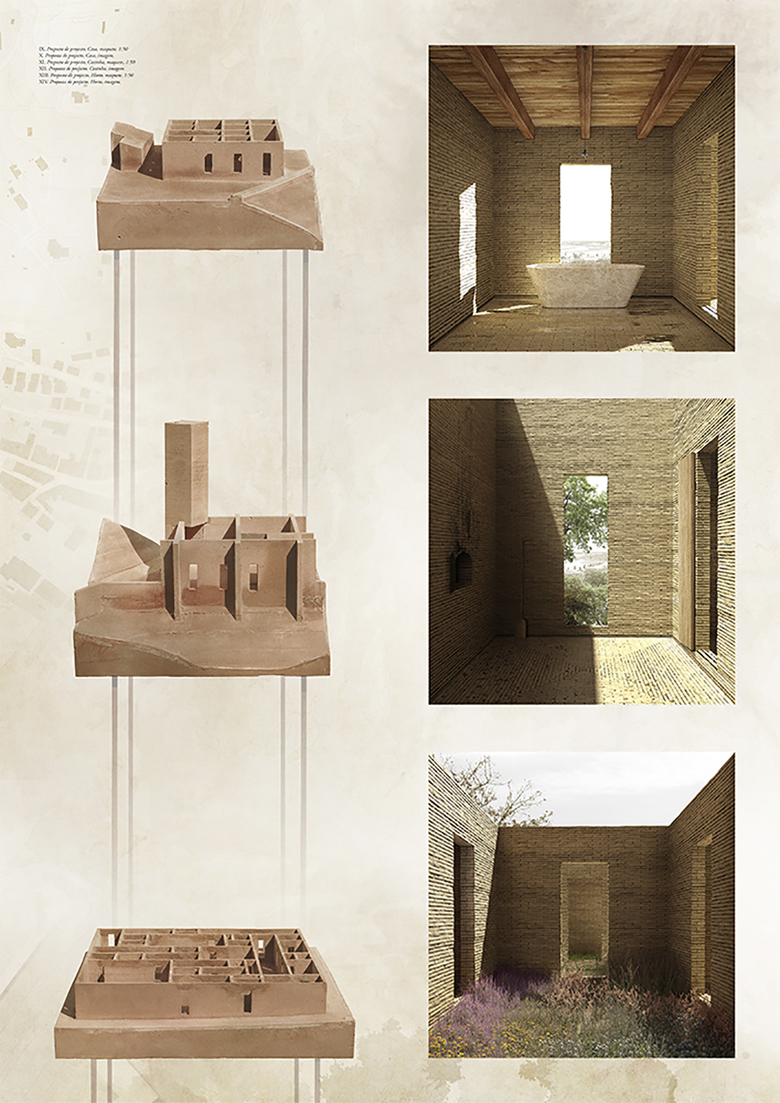 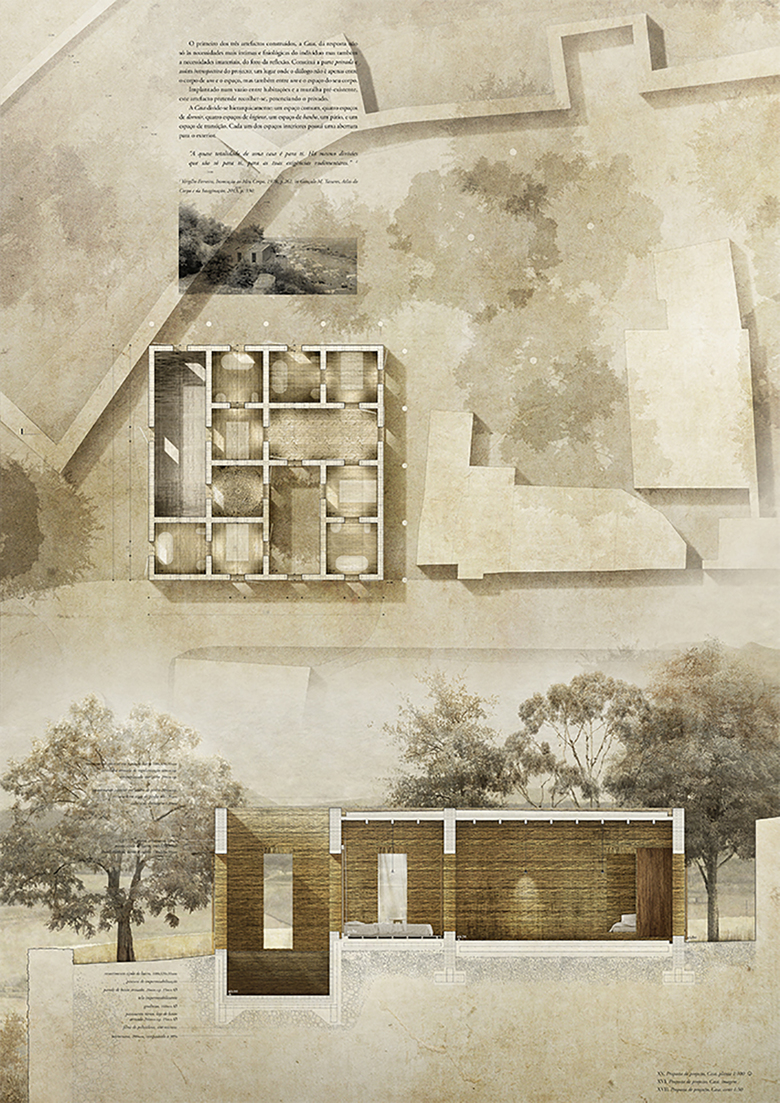 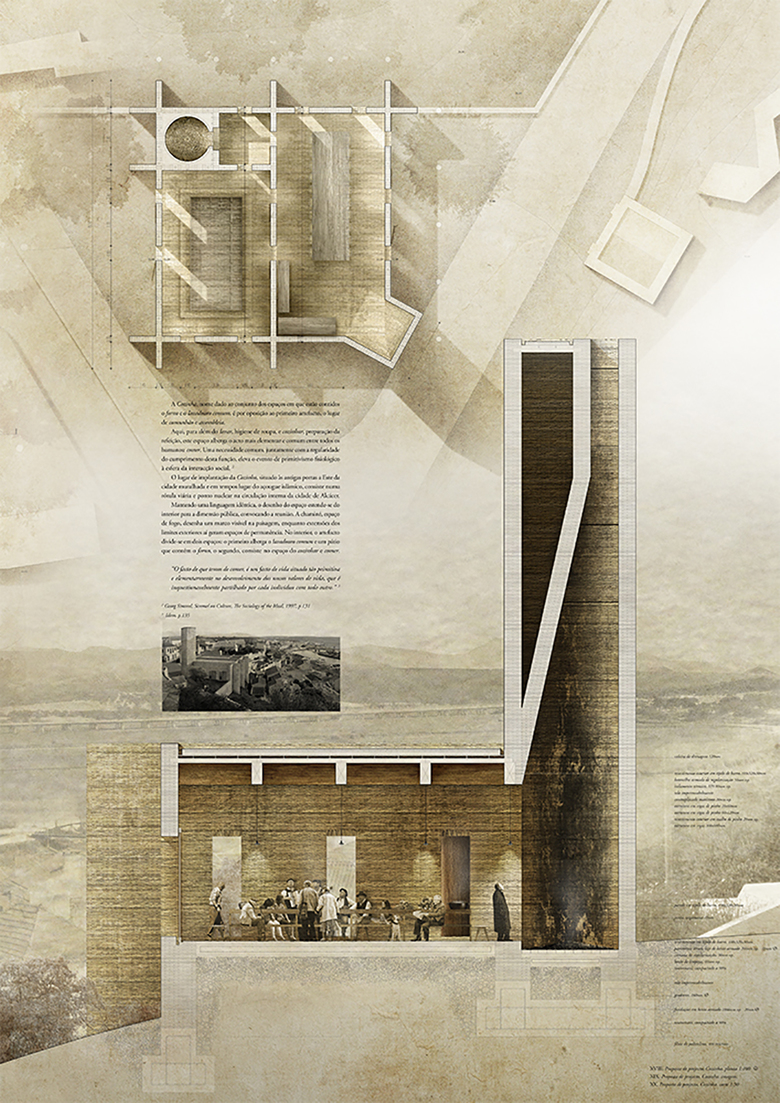 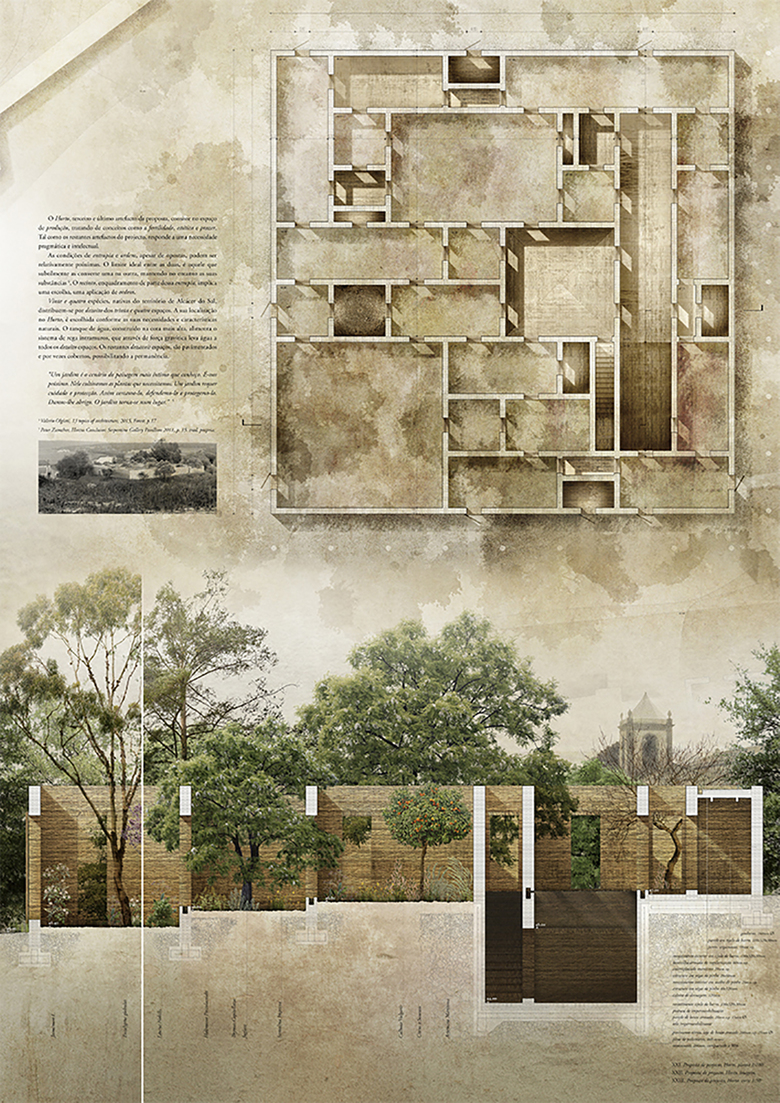 The base strategy of analysis of the territory, consists in a change of the perception scale. Through changing the study units, it is possible to understand the object in another way, not as a city or a village, but somewhere in between, between scales. The resulting intervention units, consist in three architectural artifacts: House, a Kitchen and Garden

The place is the city of Alcácer do Sal, Portugal. The hill of Alcácer, point of defence and surveillance of the city, suffered hard transformations after the christian reconquest led by Afonso II. Since there was no longer a need for defence and the river was the main source of livelihood, the population moved from the hill to the riverside, leaving the previous uninhabited until today. The proposed project intends to stimulate the movement of reocuppying the fortress area, by multiplying itself in three pontual interventions. Responding to the diverse aspects of the daily life, it connects the two main groups of population in Alcácer, a permanent one - mainly elders - and a temporary one - tourists.

The first of the three built artifacts, the House, constitutes the private and introspective part of the project, giving answer not only to the most intimate and phisiological needs of the individual, but also to imaterial needs, from the sphere of the reflection. Placed in a void between houses and the pre-existent wall, this artifact intends to retract itself, giving strength to the private. The House is divided hierarchically: one common space, four sleeping spaces, four hygiene spaces, one bathing space, one courtyard, and one space of transition. Each one of the interior spaces has one opening to the outside. The Kitchen, by opposition to the first artifact, consists in the gathering place. The place where the Kitchen is built, located at the ancient doors to the East of the walled city and where in times was located the islamic butchery, is a nuclear point in the internal circulation of Alcácer do Sal. Keeping an identical language, the drawing of the space extends from the interior to the public dimension, summoning the gathering. The chimney, space of fire, draws a visible landmark in the landscape, while the extensions of the outer boundaries generate spaces of permanence. On the inside, the object divides itself in two spaces: the first shelters the common washbasin and an open courtyard which contains the traditional oven, the second, consists in the space for cooking and eating. The Garden, third artifact of the proposal, consists in the space of production. Twenty four floral native species of Alcácer do Sal, are distributed through eighteen of the thirty four spaces, which follow the topography of an existent agricultural area trough the variation of the floor's height. Sixteen of these spaces are paved and sometimes covered. Built in the heighest level, a water tank feeds a system of intramural irrigation, which through gravitional force conducts the water to the spaces with vegetation. The spaces of the project are conceived from the composition of one element which is often used in the southern region of Portugal, the handmade brick.